A week in the life of a Headteacher 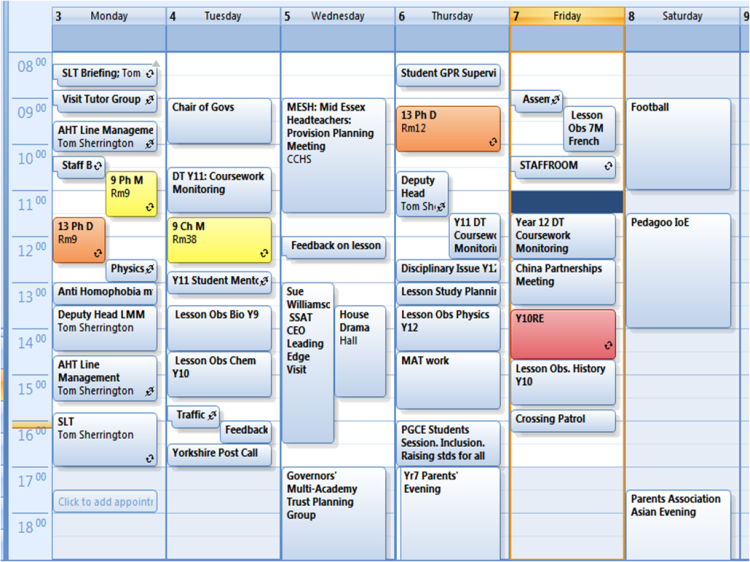 It’s been a busy week.

This has been a typical busy week at KEGS.  Looking across the diary for the week it struck me that it captures some of the essence of being the Headteacher of this school.   I had a good response to my previous diary post so I thought I’d share this week’s diary too.  The back-to-back schedule is certainly busier than most weeks; adding in the regular fifteen hours of commuting with added train delays and a Friday night bike puncture, it’s been a heavy week for sure.  And that doesn’t include the late-night email trawls, RE marking and self-inflicted blog-compulsion! ( I wrote about the Labour Bacc proposals this week.)

What does the week suggest are the key aspects of the job?

We are in the process of exploring the set-up of a multi-academy trust to sponsor two local primary schools and, collaboratively, to set up a new primary school in the vacant site adjoining KEGS.  It’s an exciting prospect but there are lots of issues to address; it’s a big undertaking but one underpinned by a strong moral purpose. It requires strong consensus to be built among stakeholders so this week I’ve given it a lot of time, working with my Chair of Governors and a working party, drafting various documents. In one AHT line-management session we discussed the process for engaging students in our vision-building process  and agreed a way to give all students a way to contribute ideas toward the Vision for KEGS in 2020 document.  It always feels good to make time to think big and look far ahead.

I’ve had a number of SLT line-management meetings this week.  Mostly this involved touching base on some low-level issues, keeping an eye on nitty-gritty matters.  In addition I’ve been working with the Head of DT, another line-management area. I’d set up a lesson to visit each of the main exam groups as part of an agreed monitoring strategy.  She uses my visit to reinforce deadlines and I talk to students about their progress, celebrating successes and pushing where needed.  Things are looking really good so it was a positive experience.

It’s an ever-present feature of school life, the importance of which can’t be under-estimated. Year 7 parents’ evening on Thursday was a very positive event. Mainly this is about teachers doing the important work of creating that three-way partnership around each student’s progress and overall school experience. My role was very much a supportive one, chatting to parents and students and basically just being around which people value. We put on a small display of the Year 7’s British Museum projects which was fabulous.  As I write now, I’m about to go off to the Asian Evening organised by the Parents’ Association; every year 200 people gather to eat Asian food and be entertained by dancing and music, raising money for the school in the process.  Schools are communities and this is all part of it.

It’s been an interesting week for student engagement with some disciplinary issues to tackle alongside one of my annual highlight events: House Drama. This involved each house putting together a programme with three pieces each.  It was a real joy with some Blackadder, lots of Macbeth and a bit of ‘The Curious Incident’. The students select and rehearse the pieces in their own time without supervision; it’s a wonderful thing, completely student-led.  Tindal House won convincingly with some stunning acting.  Before school on Thursday I had a fascinating supervision with a Pre-U GPR student who is working on his essay on Kuhn’s paradigm shift concept.  Lovely to start the day with an intellectual discussion about whether contemporary science can be characterised as ‘anarchic’.

Perhaps the most significant student engagement event was on Monday lunchtime when I met with a group of students from Y12, Y13 and Y8 to talk about our anti-homophobia campaign. Some are working on an assembly and we also agreed to set up a wider ‘Equality Group’ to take things forward. The students were clear that a non-punitive approach was needed, seeking to educate people rather than create another disciplinary layer that inhibits discussion.  I’m really proud of these students for their commitment to this issue.  Friday’s assembly was devoted to giving our Gold Certificates based on students’ effort grades in recent reports. We spent 10 minutes applauding the achievements of hundreds of students; it’s one of the most important things we do.

A number of events this week were driven by the philosophy of partnership that we embrace. The Mid-Essex Heads’ group, MESH,met on Wednesday to consider three options for phased school expansions over the coming 10 years as the population of Chelmsford expands. (It’s the comprehensive schools, not the Grammars, that will be growing – in case anyone gets twitchy!)  The LA is working with us to ensure maximum buy-in; we’re working collaboratively rather than competitively which is so important given that all the schools are academies.  In fact we work more closely together now than we ever did before as LA schools.

On Wednesday he had our annual Leading Edge visit from SSAT CEO Sue Williamson. This overlapped with House Drama which Sue enjoyed a part of. The SSAT Leading Edge group brings us into contact with schools across the country that are doing interesting things and that’s important for us. On Friday we had a visit from Lily Lin who is an Essex-based broker of school partnerships mainly with Jiangsu province in China – Shanghai, Wuxi, Suzhou.  She dropped in to talk about some initiatives she’s working on and the next stage in our support for CPD programmes involving Chinese teachers visiting the UK.  All exciting stuff.

To cap off the week, this was the week when the Labour Skills Task Force launched the report on the 14-19 curriculum that I’ve contributed to.  It’s pretty exciting to be involved in generating these ideas. I’m very open about my political allegiances  – I think it’s healthy to model political engagement in that way, provided you create open debate as we do at KEGS.  The Headteachers’ Roundtable has been instrumental in enabling me to communicate our ideas and, given the strong roots of HTRT in Yorkshire, the Yorkshire Post wanted a comment from me for their report in Wednesday’s paper. All in week’s work!

Any week that includes House Drama is a very good week indeed and I got to watch my son play football for his school team on Saturday morning before heading to Pedagoo. Being a touchline Dad is always a real joy.  I really can’t complain. But I think I might need a lie-in on Sunday.

10 thoughts on “A week in the life of a Headteacher”