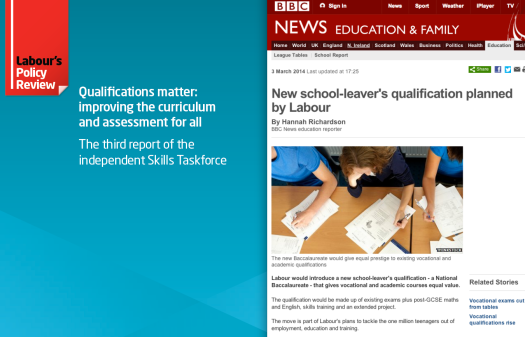 Over the last year, I’ve been working with IoE Director, Chris Husbands, as a member of the Labour Skills Task Force; it has been a fascinating process. This week the third and final report from the group was published, outlining some recommendations for 14-19 curriculum and qualifications reform.  I recommend reading the report in detail because the rationale for each policy proposal is given, based on an analysis of a wide range of challenges that our country is facing.

The fifteen recommendations are summarised at the end of the report: 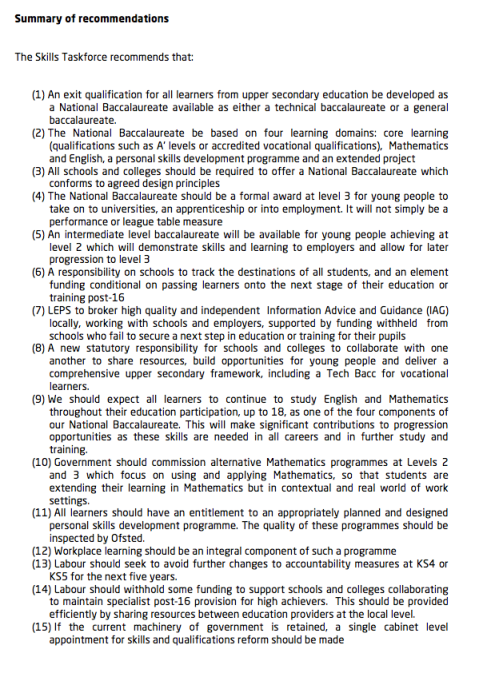 The process of arriving at these recommendations was extremely interesting. There are numerous forces at work and lots of different voices: employer groups, the FE sector, schools, academics and politicians and party officials with experience of working in government.  The ideas that made it into the final document as recommendations have been on quite a journey, passing various tests of analysis within the task force:

Some of the starting assumptions for this paper included the following:

The final Task Force report is the product of deliberations on all of these factors coupled with a belief that there is an urgent need to do more and that there is plenty that can be done within all of the constraints. Without repeating the case made in the document, it’s worth sharing a bit more of the thinking on the headline areas:

Personally, I’m delighted that this has come as to the fore as a headline policy issue.  As described in this post, the Headteachers’ Roundtable has been one of several groups promoting and developing the Baccalaureate idea into something real.  A turning point on the Task Force was recognising that a National Bacc could be built around emerging models and existing qualifications, allowing the Tech Bacc that Ed Miliband had already promoted to be built into a wider framework.

We looked at all of these models:

The proposal is to take the best of all of these ideas to create a set of National Bacc criteria that bring coherence, clarity and common standards to the emerging Bacc developments. Clear criteria will need to be met in order to gain the umbrella National Bacc, using existing qualifications as the central elements. Lots of people have said that Labour’s Bacc looks like the IBCC, like Tomlinson, like the HTRT Bacc or the Welsh Bacc etc.. Well, that’s what we wanted; it should look familiar and doable; a real baccalaureate like the IB.   It should embrace learning in a way that ensures students of all kinds receive a holistic education with embedded rigour and high standards.

As a first stage development, schools, colleges and training providers will need to ensure that they can deliver a Bacc offer, using one of any number of approved Bacc products or frameworks available in the system.  These will converge in terms of structure, to satisfy the national criteria, but could diverge in terms of emphasis according to the providers’ specialisms.  The IB would exceed the criteria comfortably.  A specialist Technical college may offer a National Bacc focusing on a specific path to industry.  A typical mixed Sixth Form will want a flexible National Bacc offer that allows A level and BTEC students to co-exist with many shared expectations and experiences.

National Bacc providers will need to deliver on all four key areas, each of which will have their own criteria in terms of volume, breadth and standards:

The need to reinvigorate IAG across the system is obvious; virtually everyone agrees that there is a massive hole in the current system and we need to take action.  Similarly, there is a clear need to compel providers to collaborate in order to create efficient and diverse provision including large-volume programmes (like the IB or 5 A level programmes).

The idea to track leavers post-16 came out of a discussion where we explored the origin of students becoming NEET.  We felt it was simply unacceptable that students leave school and then do not turn up somewhere else without anyone knowing or having responsibility for them. Our whole philosophy needs to change so that our students remain our students until they are someone else’s. That’s the thinking.  Using funding as mechanism to affect changes in institutional behaviour is not popular but there are not many other better ways to do it.  Fortunately the government already has some pretty sophisticated tracking tools; we simply need to make sure schools access them and do more to broker hand-overs to FE colleges and other training providers as part and parcel of their regular work.  Clearly more work needs to be done to deal with every scenario – such as when a student is offered a college place but fails to attend.  Who takes responsibility then? However, the next Labour government would look at modelling the detail of this policy so that we get a better rate of progression and retention on appropriate courses for young people.

To conclude, it’s much harder than it may seem to develop solutions that can be scaled up to a national level. The Task Force paper does a pretty good job; it remains to be seen how far these ideas develop before the election. And if Labour win… who knows, the National Baccalaureate may actually happen.  It gets my vote.

(If you would like to join the Heads’ Roundtable/Whole Education Bacc trial, please let me know.)

Like Loading...
« ‘Learning Lessons’ from great schools – my trip to KEGS.
A week in the life of a Headteacher »

8 thoughts on “Labour’s National Baccalaureate: Strong on Principles and Pragmatism”