Ofsted Grading IS On The Table.

I was about to write a blog called Ofsted: Good Cop, Bad Cop, RoboCop  – exploring various aspects of engaging with Ofsted: the immense power and impact of the organisation, its tendency to make itself bullet proof against criticism (it’s what parents want, no system will ever be totally reliable, that’s the DFE – nothing to do with us, etc) all set against the general all-round disarming niceness and reasonableness of all the actual people.  But that blog can wait…..

As someone who is fiercely committed to the idea that Ofsted grading is a negative force in our education system, I am delighted by this exchange on twitter today.  Prompted by a query about grammar schools by Ben Newmark, Sean Harford has responded as follows – including answering my question very directly:

The reason I asked was because earlier this week I heard Sean’s number two, Matthew Purves, give a talk and I asked him the same question: Is grading up for discussion in the new framework for 2019?  And he said no.  The reason he gave was that parents like grades and that, get this, Ofsted isn’t for schools – it is for children and parents.  He was pretty clear about that.  (Is being for children different to being for schools when schools are for children?)

So- it seems that maybe the message hasn’t quite been synchronised – and that the issue of grading – particularly the role of Outstanding – will actually be reviewed.  Anything will be better than what we have now – eg three grades will be better than four.

However, I still hope that the thinking will go even further and consider a true intelligent accountability process that has no grades.  There are so many reasons as I have highlighted in this reasonably rant-free blog:  Five Reasons to Ditch Ofsted Grades

Here’s one more way to look at it:  The Cusp Illusion

I’m forever hearing from Headteachers told that their school was ‘on the cusp’ between grades – the classic inspector fudge, softening the blow or begrudgingly giving a sightly higher grade than they’re entirely comfortable with.  This suggests some illusory boundary between them: the boundary that must be reasonably well defined if there is any hope of consistency and reliability of judgements between schools by different people.  But, in truth that cusp is an illusion – some nominal place where all the multiple sub-judgements get averaged out into an overall judgement. When each sub-judgement is itself massively subjective, the idea that a ‘cusp’ exists is mad really.

In this illustration there are two schools, red and blue, with various of these sub judgements based on bits of interactions with schools during an inspection shown on an arbitrary scale (the ‘hunch scale’).  How likely is it that different inspectors will determine that the schools fall on the same side of the cusp – even though, here the range of ‘hunch scale’ scores is identical, just placed against different elements.

Anyway – back to the beginning of the post – thank you Ofsted for at least putting it on the table. Maybe the new R&D team will sort all this out and produce processes that are more objective and less loaded by hunches and feels –  allowing those ‘professional judgements’ to be that bit more bias-free.

Of course parents want good information about schools – so let’s give them just that! Come on Ofsted – Ditch The Grades.   You know, deep down, that it makes sense!

PS: For anyone interested, Ofsted’s work on curriculum is very interesting and it will be important to keep up with what they say in relation to these issues – as illustrated on Matthew Purves’ slides.  They’re getting technical on knowledge and curriculum – which should be a good thing.

So, this morning, lurking inside @schoolsweek was this article.  Not front page news because these are rumours – but still; sounds hopeful doesn’t it! Come on Ofsted.  Do this! 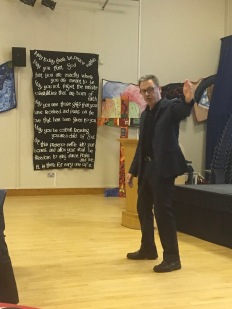 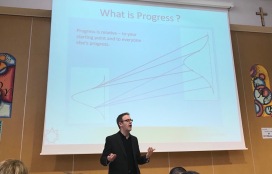