Our family remembrance trip. 40 years on.

A few years ago I posted a copy of an assembly I gave for Remembrance Day, linking our family story – the death of my father, Richard Sherrington – to the act of remembrance.  You can read it here.   He died on 4th December 1977, 40 years ago, after his plane from Penang to KL was hijacked and it crashed to the ground. He was 37.  I was 12, my brother Matthew was 13, my sister Emma was 9.

That blog drew quite a lot of attention during the early days after flight MH370 disappeared and I’ve had to update it a few times just to get the story straight about what happened to my Dad on his flight, MH653.  For much of my life I’d imagined that his plane had blown up mid-air but actually, the pilots were killed and the plane crashed into the swampy jungle around the Malaysian village of Tanjung Kupang just outside Johor Bahru, across the causeway from Singapore.  All 100 passengers and crew died.  Through the blog, I’ve had contact with other families of victims and it’s provided an avenue for various people who knew my Dad to get in touch.

Over the years, my mum, Karin, and my brother and sister and I have visited the memorial in Johor Bahru separately on various occasions.  It’s meant different things to each of us at different points in our lives.  My sister had the idea that it would be good to visit the memorial to mark the 40th anniversary so, for the first time, the three of us made the trip together.

To mark the event, my mum gave each of us a significant item in memory of our Dad. A necklace, supposedly of Ming china, the last gift my Dad gave to my mum; a scarf he wove when he was 14 and his favourite T-shirt, now nearly 50 years old.

It’s been a fabulous trip, not least because we have spent more time together, just the three of us, than probably since we were kids living at home. Here is a photographic record:

Sherrington siblings at the memorial 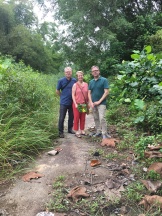 Images from the crash event 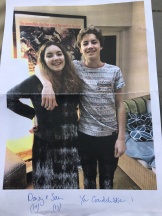 Leaving a photo of my children 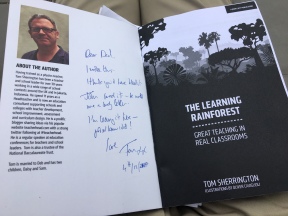 A message in my book. Part of the ritual 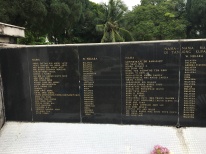 On the day we went to the memorial, December 4th 2017, we bought flowers from the local market on behalf of my mum.   When we arrived, we met a lovely Singaporean woman.  Her brother and his three children – the Tans –  had all been on the plane alongside his wife, Chai Lean Quah.  The Tan children were roughly the same ages as us. She was very tearful the whole time and, with members of her family, went through various traditional Chinese rituals: leaving food and burning silver and gold paper ‘money’. She told us that the smoke was seen as a way of communicating into the afterlife.  She has visited the memorial twice a year since it was built.

Each time I’ve been there, it’s been hard to predict my emotions.  The visits can largely be very matter-of-fact but then there’s always been a moment of catharsis when the tears begin to flow.  This time, it came when I sat down to write a ritualistic letter to my Dad underneath a picture of my wife and kids.  I told him how great they are, that he’d have loved them and that I still miss him.  I left the letter and a note in my book on the marble tiles next to the other offerings.

It was very special to have my siblings with me at that moment and afterwards as we travelled on to visit the actual crash site.  We’ve supported each other the whole way.  At Tanjung Kupang itself, it took a few enquiries from local people to track down the actual location – along an overgrown path off the main road, eventually reaching the clearing where the plane fell.  It’s all pretty unreal.  We’ve all had different images in our minds of what happened and how – details that don’t matter too much in the big scheme of things, now adjusting as images we hadn’t seen before appear on the internet. 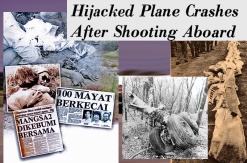 As I’ve written before, bereavement lasts a lifetime.  The grief is always there – you just learn to manage it; to get on with life.  It can be quite muted for years but can bubble up unexpectedly and hit hard again -normally when you’re feeling vulnerable for one reason or another.  We were all deeply affected by what happened to our family but we’ve survived.  Actually, despite the usual run of life’s ups and downs, we’ve all done pretty well.  We’ve been lucky.  I’m sure my Dad would be happy to know that.  My mum, now 79, has been incredible. She pulled through the most difficult 10 years and set us all up with self-confidence and a love of life despite losing our Dad.  She’s been with my step-Dad Larry for 30 years now – and that’s been a huge blessing in our family.   I remember giving a speech at their wedding saying how great it was to see her so happy.  It still is.

A large part of our shared sadness comes from what we’ve missed, as much as what we lost.  My brother has a lovely family, he’s a charity sector strategist- currently working as communications director at Oxfam; my sister’s a successful family lawyer and an amazing potter; I’ve  followed a career I’m proud of.  We all took something from our parents’ values and tried to make a difference. He’d have liked that. And he’d have loved his four brilliant grandchildren and his daughters-in-law.  I so wish they could have met him, but mainly I wish he could have met them.

Who knows if any of us will ever return again.  It’s a long way to travel for what is essentially a ritual.  He’s not in that place; we know that.  He’s alive in our hearts and in our memories. But, irrational as they are, rituals seem to matter.  The Tans’ smoke meant a lot to them and making this trip has meant a lot to us.  For certain, Richard, our deeply loved and much missed Dad, is very much with us – and always will be.

Like Loading...
« 10 low impact activities to do less of – or stop altogether.
10 ways the gold dust of CPD time is wasted. »

8 thoughts on “Our family remembrance trip. 40 years on.”