Schools that work for everyone? The challenges for comprehensive education. #educationfest

My talk at the Wellington Festival this year was originally intended to contribute to the discussion about new grammar schools.  However, given that this idea seems to have been put aside – at least at any significant scale – I swerved it around to focus more on comprehensive schools.  Years ago, when I worked at KEGS, Toby Young came to visit me as part of his research before setting up West London Free School.  We discussed the idea of a ‘comprehensive grammar school’ and whether that was a realistic notion.  Can we capture the best features of a grammar school and transfer them to a non-selective school?  Having visited WLFS, I’d say they’ve done a good job of doing just that – but is this realistic in any community comprehensive?  In my talk, I wanted to capture the very real challenges that this presents – with some possible solutions.

I can’t stress enough that the level of inherent, embedded institutional rigour and challenge that I found at KEGS was remarkable.

But do grammars work for everyone? NO – of course they don’t.  Not individually or at a system level.  Grammar schools represent elite provision for a select few; not a system-solution to raising standards for everyone.

But we have to remember that there are other forms of selection:

While all these forms of selective school exist, we are a long way away from a genuinely comprehensive education system and, where people can opt out, they often do.  I’m not claiming high moral ground here; it’s simply an embedded feature of our system.

Here are some of the problems we need to address if we’re going to change things:

Since Nicky Morgan decided to blow any hope of change completely when new GCSEs were introduced, we’ve condemned 30% of students to be regarded as failures.  Fundamentally, structurally, our exam system guarantees that schools cannot work for everyone.  Instead of looking to recognise achievements at all levels, we’re wedded to a system that requires lots of students to fail in the name of standards.  This scales up to the level of schools in the data machinery.  It’s not possible for all schools to improve or succeed in what is virtually a zero-sum game.  (See the Bell Curve Cage).   And of course, schools in more disadvantaged communities have a harder job.  Unless that changes – we’re stuck. 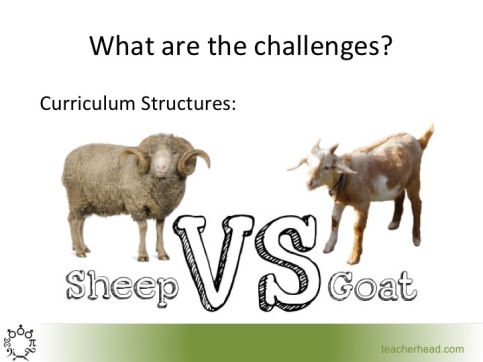 Within schools, we continue to have a massive issue with equal opportunities in relation to the curriculum.  Instead of committing to a broad, academic curriculum for all, we still tend to allow curriculum divergence to happen too early.  Schools that operate a ‘grammar stream’ or aggressive setting that cuts a firm line between students of different starting points, are perpetuating this. They work for some, but not all.  Possibly they even for some at the expense of the others.  Until we’re putting our strongest teachers on our lowest sets that will remain the case.  Another issue is that our qualifications structure post-16 has very poor (almost absent) provision for students to pursue an academic curriculum at Level 2. For example there is no option to study History, improving from the equivalent of a C standard to an A standard.  It’s a choice of failing at A level or doing a vocational course.  Sheep and goats.

There’s a growing trend towards a more narrow curriculum, driven at least in part by accountability measures: a three year KS3, three options instead of four – that kind of thing.  No-one will persuade me that this is curriculum thinking people would pursue in the absence of the accountability system we operate in.  Meanwhile, up at the grammar schools, there are more options at KS4, more chances to study Latin, German and classics and so on.  (Aside: Perhaps Ofsted’s new emphasis on curriculum will shift this – although I suspect it will be akin to a choice of death by hanging or firing squad, rather than of accountability becoming more intelligent and humane.)

This is the meat of the problem.  I am often asked to support teachers and schools with ‘stretch and challenge’.  Too many children experience a curriculum where the lid is on too often.  Usually this is driven by a sense of needing to  keep control in classrooms and to

make sure less confidence learners are thriving – but it can come at the expense of proper rigour and challenge at the highest end.  Grammar schools only need to worry about one end of the range.  Setting and streaming give the illusion of dealing with this  – but they really only mask the problem because children further along the bell curve are not challenged as much as they could be.

We need CPD that shifts teachers’ mindsets and gives them the confidence and knowledge to fully stretch out – or deepen – the curriculum at the top end.  What does excellence look like in any curriculum area? Answering that needs to be a higher priority.

It can be a taboo to talk about social class and achievement because of the dangers of stereotyping and of creating false polarities.  However, I think we need to examine the challenges schools face in creating social harmony and in giving consistent messages about achievement and aspirations in socially mixed areas.  Where children from the more aspirational, more affluent families, rich in cultural capital are a small minority amongst peers where disadvantage and low aspirations dominate, it presents lots of challenges.  There isn’t a natural critical mass and schools need to contrive an ethos, messaging and practices that drive an achievement culture.  It’s entirely different in a schools where the critical mass is present – I’ve worked in both kinds of schools.  It’s also different in a monocultural schools.  These are tricky questions.  Social integration doesn’t happen by magic and different sets of values demand different responses.

Some middle class parents expect schools to meet their children’s needs in a way that matches their values whilst they live their lives without actually engaging in any direct integration with their neighbours in the deprived estates next door. I know several Heads who will explicitly say ‘I don’t like middle class parents’; they’re happier not to have pushy parents making demands of them.  Without going much further, I’m just saying that it is hard to be all things to all people – and that critical mass in terms of learning culture is a massive advantage many schools don’t have. 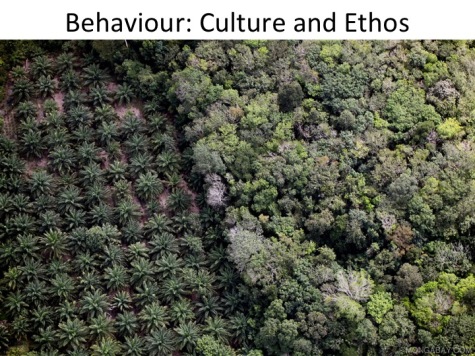 The social inclusion challenge extends into things like behaviour.  In this plantation vs rainforest image, the metaphor is simple: some students need a clear regime if they are to learn the habits needed for success, safety and happy cohabitation with their peers.  Other students do not.  In fact, some parents will actively lobby against the imposition of a regime their children don’t really need – even when they understand that other children do need it.  Getting the balance right here is possible but difficult.  If we want schools that work for everyone,  and just our own kids, we need a much wider public conversation about the need for behaviour systems in schools and the need for parents to get in behind them.

This diagram – one I found online – illustrates the challenge.  Very often we have students parked in units in schools such that inclusion isn’t really happening. However, getting this right is so much easier said that done.  Too many SEND students have their needs met by ‘off to the side’ provision – not through mainstream teaching alongside their peers.  Parents often think that extra support is the answer even when it can be the source of problems: taking SEND students out of the mainstream, fostering low expectations and so on.  Not always – obviously.  Getting the optimum provision right with some learning needs is hard.  Let’s not pretend otherwise.

The biggest challenge is with behaviour and mental health issues where the challenges some students experience lead to behaviours that have a direct detrimental impact on the learning needs of others. There’s no easy answer here – but if we take the view that no child, whatever their personal needs are, should be allowed to disrupt the learning or threaten the safety of others, then we can’t allow our desire for universal inclusion to override the obvious and hard fact: some children need to be taught in special provision away from others – so they can all learn.  The responsibility for this can’t be down to individual schools with the assumption than any exclusion is a failure.

I’ve written about these characters before.  There are children in the world for whom hitting boundaries is an everyday experience.  Even with the maximum investment in multi-agency support, the timeframe for them to learn the habits needed to function in the social, regulated environment of a school with an authority structure needed for effective learning and safe co-existence, is so long, that they can’t help but car-crash multiple times.  Talk of ‘no excuses’ with these students is simply to cut a direct route to permanent exclusion.  The issue here is that schools take the rap for exclusion even when it’s patently obvious that a child cannot thrive there.  All kinds of horse-trading goes on because of the perverse incentives at play.  Heads hold on to students far longer than is healthy for those around them, tolerating unacceptable levels of disruption and defiance – all the while being challenged by various stakeholders to provide more support. 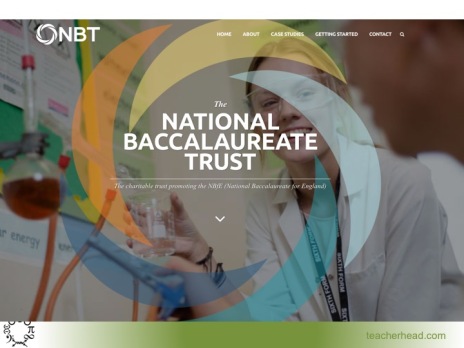 Possible solutions: Here are some thoughts: 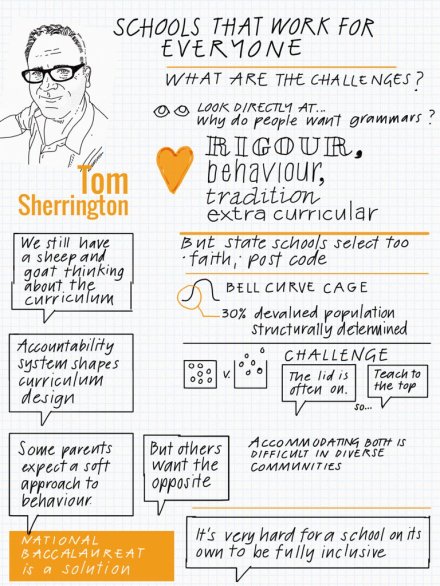 Huge thanks to Oliver Caviglioli for doing this.

6 thoughts on “Schools that work for everyone? The challenges for comprehensive education. #educationfest”