A Free School on our doorstep? I have some questions…. 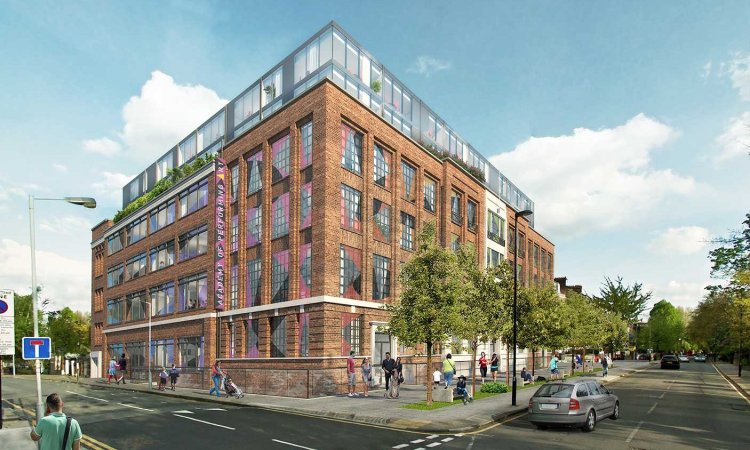 Just before the end of the summer term, I was tipped off that an architect’s website was showing the development pictured above.  They suggested it was to include a 750 place secondary, a 250 place sixth form and residential units.  I contacted the Local Authority officers who knew nothing about it.  Subsequently, this development has been reported in the papers.  The Funding Agency within the DFE has paid £33million for this building and a property developer has made a sweet £7million+ in less than a year. 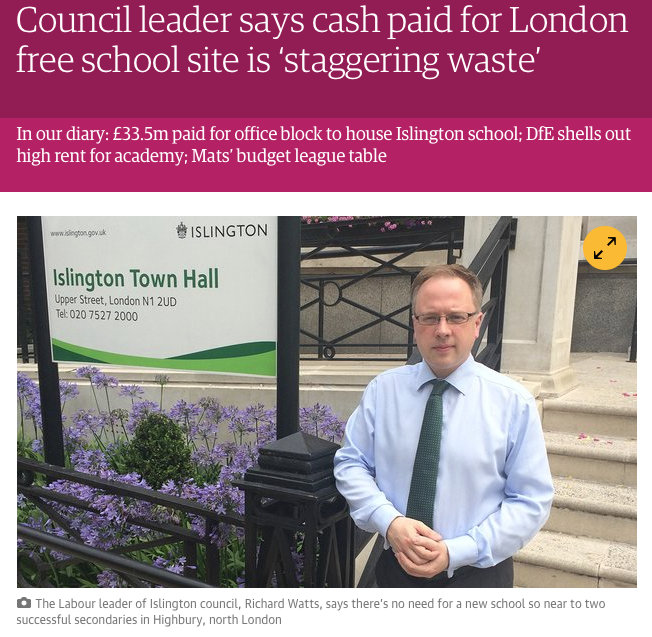 Further details were reported in the TES:

So – this is appears to be happening.  I have no idea when or what the school will be. But, just to reinforce why I might be bothered, let me show you where it is:

The squarish building at the corner with Kelvin Road is 366 metres from my school and 200 metres from Highbury Fields.

At this stage, I’m just watching to see what happens.  There are lots of obstacles for this school to overcome including the issue of planning permission. Of course, I should be able to walk tall and have enough confidence in my own school not to worry about some additional local competition up the road.  We’ve got a lot going for us.  However, in reality, this is another set of issues and challenges I could do without; we’re busy enough as it is!  It’s not as if we haven’t got our hands full!  For sure, my governors and I will have all kinds of questions.

What kind of school is this going to be? That, to me, is the crucial question.  I can’t help but think that, whatever it is, the intake will not be as diverse as mine; they won’t have 70% of their students on pupil premium; they won’t be playing their part in the local safety net, supporting students  with the greatest disadvantages.  If the school is selective in any way, either explicitly or covertly, that’s going to be problematic.  How could that be acceptable? What would the rationale be for a new school not to serve the whole local community in the way that we do?

How could the site be regarded as suitable for a school with KS3 students?  It has no outside space at all and, looking at it from the outside it’s inconceivable that it could accommodate 1000 students.  This will have to be a school where students do not have to have any need to run around; in itself that applies a selective filter of sorts.  Is this how far the free school ideology has gone: any building will do?

What is the logic of placing a new school smack in between the two existing Highbury schools? We are marginally oversubscribed but Islington has undertaken a detailed place-planning review for the next 10 years. One outcome of this is that my school will expand from 210 to 240 per year group in 2018; capital funding has been agreed for a small building expansion.  This process is already fully underway. There will be no demand for a school of 1000 places in our area.  Is it the philosophy of the DFE that place planning is irrelevant; that it’s ok just to plonk a school down anywhere and see how it all shakes out?  There is a high risk that at least one of the  three schools will end up significantly undersubscribed; it could be all three.  It’s unlikely we could pull in many children from outside our area much more than we do because there are lots of good schools across all neighbouring areas.

Why is the process so lacking in transparency?  We work in a highly collaborative local authority where issues common to all schools and academies are shared.  A recent local school status change and academisation process was conducted in full sight.  To date, there has been no official notification of this new development. The sums of money involved are quite staggering. I can’t imagine that £33million is good value for money for that building and, let’s face it, it wouldn’t be a surprise to find some kind of connection between the developers and the DFE folk driving it through.  Given the budget pressures we all face and the procurement rules we all have to adhere to for anything over £10K, it’s astonishing that DFE can spend so much money without it being subjected to a high level of scrutiny. Maybe it has been – but let’s see the details out in the open.

Is the plan for a UTC?  This has been suggested to me.  If so, my knowledge of UTCs is they (and their Principals) suffer hugely from a lack of cooperation from local secondary partners.  It’s obviously a complex issue if you are trying to recruit into Year 10 and Year 12 in competition with local schools. It seems to me that, for a UTC to thrive on our road, it would be better for all concerned if we were involved in discussions from the start.

I don’t even know when or how to get answers to these questions.  I’ll keep readers posted as and when I have them.

UPDATE: September.  Evidently the plan is for the school to be set up by the Meller Trust.  Some kind of media/arts 11-18 school?  Some connection with Working Title?  Something about pan-London admissions?  Meeting for all parties scheduled for early October.  I will report back.

Like Loading...
« More Grammars? Bad idea. But selection has many guises…
Exam grading is inherently flawed; but there’s no conspiracy. »

11 thoughts on “A Free School on our doorstep? I have some questions….”