Building a Trust Culture: It’s not all hugs

In the last two weeks I’ve been to a number of conference events with the SSAT and Essex Headteachers and attended the London Festival of Education.  I’ve had the pleasure of meeting and hearing the wise words of some of the best contemporary educational thinkers: Guy Claxton, John Hattie, Sir Tim Brighouse, John West-Burnham.  I’ve also listened to and read what Sir Michael Wilshaw and Michael Gove had to say and heard a lot about Finland.  Perhaps most importantly I’ve been talking to school leaders and teachers from across the country. From all of this talk,  I’d suggest that although some ideas are presented differently, there is an overarching or underpinning consensus about some key issues.

So – we know what we want.  However, there is less agreement about where we are now in relation to these goals and how we’re going to reach them.  We’re told a lot about Finland. Why? Because apparently their system is like the one I’ve just described.  The Finland story is basically one of a virtuous circle:

So, at a system level, the trust is there; teachers and schools deliver and everyone is happy.  Arguably in England, the situation is in reverse… there is a debate to be had about where to start on the circle.  It’s a chicken and egg scenario.  I’ll go for this…

A caricature? Maybe but real enough. So the challenge that we face is to move from this low trust, command and control, circled wagons scenario to the Finnish scenario: high trust; high performance.  Where are we going to start?

At a school level, this transition is hard enough; it is also challenging on a class or individual level. Is it Chicken? Or Egg?  Do you trust enough to take a risk, offer up a chance to succeed or fail and then develop deeper trust based on a positive outcome or the evident desire to strive for success.  Or do you demand success as precursor to trust and only let go when it is absolutely secure?  In the latter case, how do you know what students or teachers are truly capable of?  In the former case, is it acceptable to run the risk of failure?

Well in my experience the answer is always Egg!  The trust has to be given first;  the wagons do not un-circle unless you do this. However, this isn’t all soft hugs and feelgood factor: you need to take a risk at the same time as demanding high quality outcomes and reinforcing that people act with integrity: ie they do the right thing when no-one is looking (an idea nicked from Alistair Smith). Rather like the difference between a cage, a Safari Park or a Game Reserve…. it is a question of how much freedom you give before you hit the fence, but there is always a fence in the end.  Here, we are talking about student outcomes as the boundary.  Do it your own way – but deliver! That is what trust looks like.  Not, do what you like because nobody cares.

At a system level, do we expect or even want any Government to relax the controls and say  “off you go, teachers and leaders; do what you like and make it happen?”  I wonder if we’d suffer from an immediate relapse having developed institutional system-wide Stockholm Syndrome for the last 30 years? Captives afraid of the outside world after all this time and secretly attached to our captors? Food for thought!

My impression is that the combined effect of successive OfSTED regimes combined with narrowly defined league table performance measures has had a shattering effect on the system in terms of our inherent capacity for autonomous self evaluation and accountability.  We’ve lost our bearings. Too many capable Heads and talented teachers are deeply inhibited, afraid to fail, afraid to be trusting of others and are deeply risk-averse.  This can’t be their fault alone. The system needs to change. When a lot of really good people are shouting loud and clear ‘just let me get on with it’, ‘let me teach’, ‘let me run my school they way I see fit’….but feel shackled, it can’t be right.  High trust schools, with superb Heads and outstanding outcomes are still dragged into the mire with dodgy accountability processes, flawed examinations and partial inspection judgements.

However, realistically, can we demand more autonomy and ask to be trusted more until we demonstrate that, across the system, controls aren’t really needed?  My view is that, within the existing system, many teachers and leaders already have more autonomy and freedom than they know what to do with. (There, I said it.) There are perverse incentives inherent in the league table culture that lead to a narrowing curriculum and an almost absurd over-emphasis on Year 11 intervention – but these are not directly imposed.  We choose to act compliantly.  Perhaps we have all the real autonomy we need but just need to be more courageous (I want to say ‘grow some’) and do what we believe in anyway.  I have said this often to colleagues complaining about ‘the rules’. ‘What would you do if it was totally up to you?’ The answer, too often, is that they don’t know. (eg on designing their ideal curriculum model.)

Underpinning a lot of current discourse is a failure to talk in detail about the range with a body of teachers or collections of schools.  ‘Teachers’ and ‘Schools’ are very often used to describe all teachers and all schools, crudely lumped together. Similarly ‘good teachers’ and ‘bad teachers’ is a gigantic oversimplification.  We are so quick to get on the defensive when some says that teaching could be better.  This becomes ‘blaming the teachers’  which is deemed to be unacceptable so we shut-up shop. Wagons circled.  Of course, most teachers are doing a great job and the vast majority can improve significantly with appropriate support and effective CPD.  But, even if we were to tolerate some mediocrity,  the almighty elephant in the room in this discussion is that some teachers and some leaders are simply not up to the job and never will be.  It’s a fact that we need to face head-on.  Even though this has an impact on us all, it is such a taboo, bordering on heresy to suggest it.  The problem is that crude accountability systems have bred such a degree of insecurity that the profession is more likely to challenge that fact than face it.  Changing this is one of the keys to moving on and it has to come from both angles;  more sophisticated and subtle accountability; an end to sweeping statements about ‘teachers’ and ‘schools’; less generalised insecurity and more internal robustness about tackling inadequate performance.

Early in my career I worked in a school where we’d often discuss whether we’d send our own children to that school.  The answer: only if we could pick the teachers. I became Union Rep for a year and found myself being asked to defend a colleague who struggled every lesson, every day.  Despite hours of intensive support, she didn’t improve.  Eventually I told her the best way to protect her job was to listen to the advice people were giving her – something she could not or would not do.  ‘You’re my union rep and even you think I’m crap’ she said.  I resigned from being Rep.  She needed to go and I wasn’t prepared to defend her given that I felt she was being treated fairly.  It was hard to shift her then and it still would be.  Accountability matters and we should embrace that with more confidence and gusto. What are people afraid of? It has been reported to me that each year in the US, 1 in 50 Doctors is forced to leave the profession, one in 150 lawyers but only 1 in 2500 teachers.  Is it similar in the UK?  I don’t know… but we’re hardly walking on a knife edge.  The real danger comes from schools that are in decline with falling rolls. Here, surely, there is more reason than any for colleagues to support and challenge each other and not to tolerate under-performance.

So, to build the trust-driven system we’d like,  we need to seize it.  As leaders we need to give it, earn it and build it.  But let’s not confuse it with anything that feels soft;  the trust we seek should come with as much rigour and challenge as you’d find anywhere.  Even Finland. The point is that we need to be doing that for ourselves, not leaving it to others.  If the system feels too big – then at least we need to work on our own patches and give our own teachers a taste of a high-trust culture. A good starting point is to set them free in the classroom.  Do whatever you like —just make it work and, every so often, dazzle! 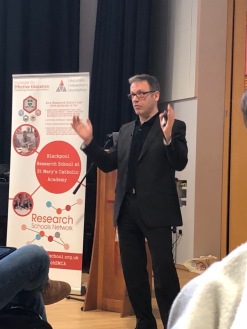 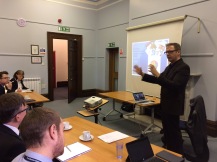