Judging schools from the outside. Wrong, toxic, needs to stop.

I tweeted this recently:

This stuff really winds me up. It comes in many forms:

My honest view is that, whilst debate about education policy, purposes and practices is essential, public criticism of individual schools is never in the public interest. It’s not ok. It’s damaging, very stressful for the people concerned and is almost entirely motivated by something other than public interest: newspaper sales; hits and likes; righteousness. Having been on the receiving end of all of this stuff I can tell you that the effect it has is terrible. It’s demoralising for sure – staff, students, parents: everyone picks up on it. You think your critique is helping, saving those poor children from the injustices dished out by the school they’re in? You’re not.

Beyond the demoralising effect – and all the time it takes to handle it- the main thing is the frustration that schools can never really put up a defence to all the falsehoods, to present a complete narrative and address all the false information. Once a story is out..spun every which way…. the counter-narrative rarely gets heard. The falsehoods persist; like a giant cloud. A stain.

I remember arguing fiercely with various local/tabloid editors about their stories. Different editors succeeded in making it harder to tackle knife-carrying issues (literally making their community more dangerous) by falsely representing information, thus forcing people to hide concerns rather than share them; making it harder to facilitate the gender transition of a member of staff (gossip-chasing fluff to them; real life for someone else but what did they care); making it harder to deliver the behaviour policy that was needed by characterising routine practices as ‘Orwellian’.. All that stuff. Public interest? Nope.

Probably my fault in some way – a ton of naivety, for sure – but, having been burned a few times, when I see this going on it pains me. It also pains me when twitter folk do the same. There’s always a righteousness.. sure school-shaming is wrong, but on this occasion, when I’m doing it, it’s totally justified. That kind of thing. If you’ve ever put a big Quote Tweet around another school’s shame story, adding another blow to the pile-on, you should feel bad about it. Whose side are you on? Because it sure isn’t the students’ side. Or the teachers’.

Why? Because, to repeat my tweet: You won’t know the full story. You don’t know for sure your decision would be better. You almost certainly couldn’t run the school better yourself. It’s ironic when some great teacher-champions (#trustteachers) are fine with questioning others’ decisions when they are nowhere near a position to know the details. Maybe, just maybe, in that community – with those parents, governors, teachers, students, their shared values and experience – the people who are there know what needs to be done? You’d think. And if they’re running a great school, really, who are you to criticise the details of how they achieved it?

And as far as accountability goes, if you’re casting judgement, do you think schools are not already accountable enough? It starts in the primary playground. Parents are there at teachers’ doors, casting judgements freely. Schools generally know all too well when their parents have concerns. Ever seen a Headteacher’s inbox? Then there’s the data, the inspections (don’t get me started), the financial audits, the governors’ meetings…. schools have plenty of accountability. At times they get crushed by the weight of it all. Unless your child goes to that school or it’s the school in your community, they really are not accountable to you personally, tweeting your opinions from afar. Again, good public servant that you are with your lofty standards, you’re not helping.

If you trawl my tweet history (people do this!) and find that I’ve violated my own standards here, I’ll be surprised but also deeply ashamed. If I have a concern about what a school is doing, I could write to the Headteacher in a letter with my name on it. If I’m not prepared to do that, I should keep my thoughts to myself and take great care to discuss the wider issues in a very general sense… because to do otherwise is to do damage a school and its leaders’ capacity to do their work. Why would I want to do that? 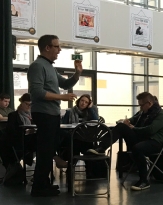