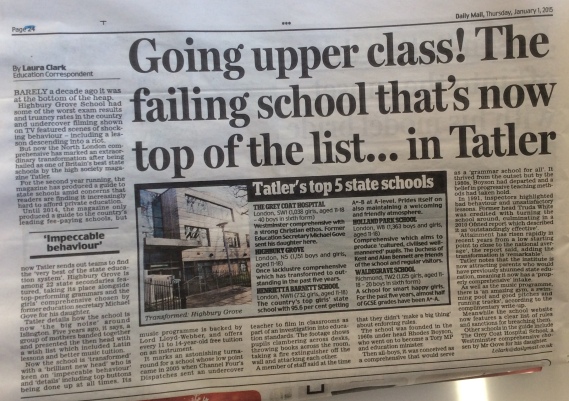 I woke up on New Year’s Day to be greeted by various tweets alerting me to the news that Highbury Grove was featured in a new guide to state schools published in Tatler. Here’s one from Alice Woolley, Editor of Education Guardian: 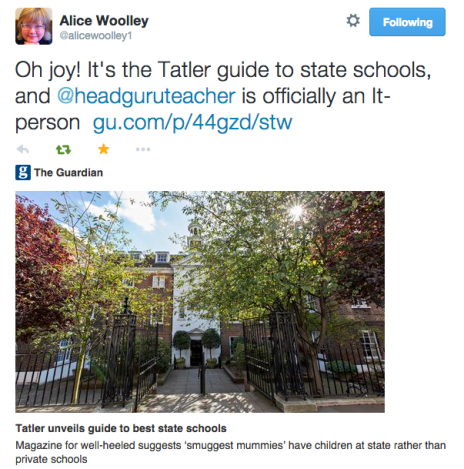 And then came the Daily Mail link:  http://www.dailymail.co.uk/news/article-2892985/Highbury-Grove-School-tops-Tatler-guide-one-Britain-s-best-state-schools.html

According to the Daily Mail, Highbury Grove is one ‘Tatler’s top 5 state schools’ in its new guide. That’s not strictly true  – because, as far as I can see, they are not listed in a hierarchical order – but, hey, why spoil the story? The DM went for the rags to riches angle – see above – focusing on the significant transformation that Highbury Grove underwent under my predecessor Truda White before her retirement in 2012, which included one of the last BSF re-builds.

I have broken my normal vows of abstinence and have purchased the Daily Mail and the Tatler to see what they said.  The Tatler, in what appears to be the January Self-Parody Issue, includes a free 2015 Yacht Guide, a feature on ‘Labour’s Top Toffs’ and a classic ‘at home’ feature on Viscount Cowdray and his family. 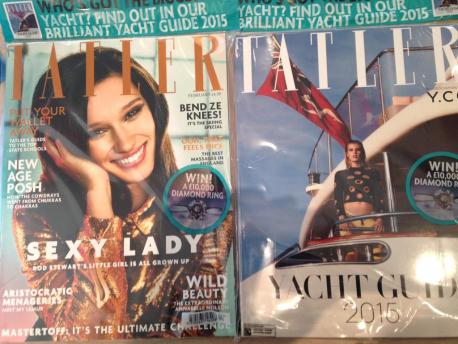 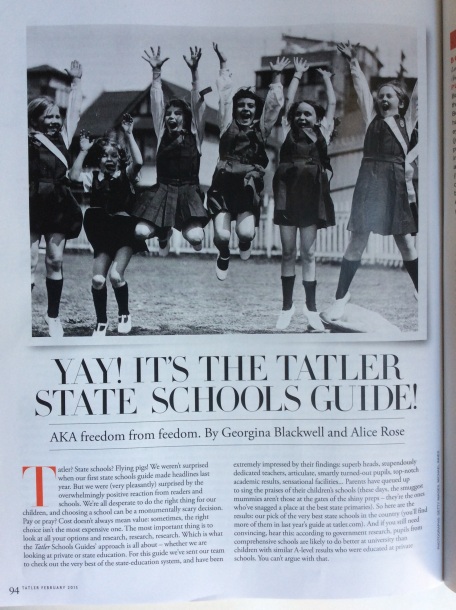 and the Highbury Grove bit is here:

So, what to make of all of this?

There are obviously huge risks in attaching significance to a guide that is based on dinner party gossip, reports from ‘spies’ and a loose collection of anecdotes from people spoken to by the Tatler Team; this isn’t an objective survey – it’s directly positioned to serve the interests of Tatler Toffs who live in very specific pockets: London, North Oxford and a smattering of country towns.  Another view is that, despite the attempt to tell a good news story, there remains a depressing undertone throughout both the Daily Mail and Tatler pieces reinforcing the idea that most state schools aren’t good enough for Toffs. (Tatler freely refers to its readers as Toffs, Posh etc…).  The Tatler approach seems to be to focus on the money-saving aspect: (why go private if there are schools this good for free?) whilst the DM can’t resist dragging up an old (disgraceful) undercover film that sold my school down the river.  To be fair, to Tatler’s credit, they do refer to research that children from comprehensives with the same A levels as peers from private schools, ultimately do better at university; it’s not just about the money.

However, it is definitely interesting and possibly significant that the message about the quality of state education is reaching these people.  One of my guiding principles is that we should never fear competition from selective schools or private schools.  I don’t want people to choose Highbury Grove because they are roughing it or hitting hard times; if they are lucky enough to live near enough, I want people to choose us because we offer as good an education as they will get anywhere else bar none. That means we focus on very broad curriculum provision, top-end challenge, great extra-curricular opportunities, rigour, discipline and fiercely high expectations without a chip on our shoulders or any excuses.  Despite what some commenters seem to believe (as justification for our inclusion in this list), Highbury Grove has well over 70% of students on FSM in all years with over 50% of students speaking English as an additional language.  However, we are now also fully comprehensive – possibly one of the most socially diverse schools anywhere.  Our idea of inclusion is that we have fiercely high expectations of every student – and that would include the Tatler Toffs if they fancy it.  But, if you are one of them, please don’t think you’d be doing us a favour: you probably need us more than we need you! Darling.