A series of short posts about specific elements of teaching practice that I think are effective and make life interesting. Some are based on my own lessons and others are borrowed from lessons I’ve observed.

As a physics teacher I don’t have to deal with essays directly except for A level research coursework.  But I’ve been closely involved with the History department (as line manager), Economics (through a lesson study process) and English (as a result of an extended battle with AQA over marking and post -results appeals – which I blogged about here. ) Essays as products and expressions of learning are the polar opposite to the pieces of visual art or design technology.  In those areas, it’s immediately obvious what has been produced and students and teachers can gain a great deal from discussing specific pieces of work – the skills, the thought processes, the standards, the areas of strength, the areas to improve.  In this post  Lessons from Art Lessons I’ve described  the power of students gathering around in a circle to look at exemplar art pieces as they are being created, not just when they are finished.  But when there is a lot of extended writing, we need a different approach altogether.

As my students are always keen to stress, essay writing is different in different subjects – especially at A level.  A philosophy essay is different to a history essay; an English essay is very different to an economics essay. In getting students to be able to craft high-scoring essays in exam conditions, there’s a lot going on:

This is no mean task especially if we are trying to blend the assessment with the appreciation of the content in a motivating and effective manner – as discussed in Pedagogy Postcard #12.

Using exemplar essays is an excellent way to allow students to see how all of this is done in practice.  Just as I’ve been drafting this post,  Chris Curtis has produced  a superb blog about teaching students how to write with a certain tone in English.  This is an excellent example of using exemplar writing as a stimulus for learning. He produces his own writing and shares it with students – for them to emulate and surpass with their own.  It’s carefully crafted to highlight the learning points in hand.  Christopher Waugh has a lot of exemplar material on the Edutronic_net site for his English department including student work that sets a standard as in this example of a Y10 Theme Study.  Using exemplars is obviously a routine part of teaching how to write essays.

What I’ve observed is that the best value from using exemplars comes from investing time in analysing them fully.  It takes time to read them; it takes a longer time to then evaluate them and extract the learning that students can apply to their own writing.  This can be done badly – if the essays are waved around just to look at visually or if multiple essays are passed around for a cursory glance  or made into displays that students never look at closely.  To properly explore an exemplar so it acts as a beacon, shining light on the path to success, is something that needs to be done slowly.

In the Lesson Study process I’ve been supporting with two Economics teachers at KEGs, this has been the focus.  In the first cycle  – described in this post about our Lesson Study on AS Essay-writing – we had some partial success with using exemplar essays but felt that we could improve the lesson still further.  Recently, we ran the second cycle and it proved to be much more effective. Essentially, the process was this:

This emailed feedback from one of the students gives a flavour of their perspective on it:

The outcomes from the students’ own essays were very strong. They’d learned a lot from the process.  The key points seem to be this: 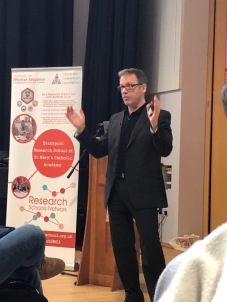