EBacc Alternative: One System for All; Excellence for All

In order to contribute to the debate about the assessment framework that might replace GCSEs and A levels,  I would like to put forward an alternative. Here is the pdf:  The English Baccalaureate Framework. I envisage a system where the vast majority of students graduate from school at 18 with an English Baccalaureate qualification of one kind or another, with each one being regarded as a Gold Standard; a measure of a high quality education by any international measure.  I have deliberately used the English Baccalaureate term.  My feeling is that this concept has been stolen for something rather flimsy; it needs to be re-captured to stand alongside the International Baccalaureate.  (Mr Gove’s EBacc should wither away.. but the name is strong and I like it!)

Overall I have tried to take the most effective elements of existing systems to produce a framework that would suit my most able students (ie Oxbridge bound with 6 A levels and 13 GCSEs at A/A*); more standard-path students ( 8-10 GCSEs and 3 A Levels); students who achieve below the 5 A*-C EM threshold and everyone in between.  Rather than a piecemeal attempt to morph existing qualifications into a new framework, I am proposing that all the units are newly configured. They may originate from a GCSE or an A Level or a BTEC but they would essentially be new units of assessment, tailored to fit this framework.  I am also deliberately trying to echo the ideas expressed by all parties; anything too radical has no hope of gaining acceptance.  This model builds on ideas from Adonis/Gove/Twigg – it isn’t far off what we have now;  I am hopefully adding coherence, breadth and depth.

This EBacc Framework proposal has the following characteristics:

The core concept is to create a system with a flexible GCSE-style foundation coupled with a top-level that would be a structured multi-component framework similar to the IB or Pre-U but with more subject flexibility.  The framework allows for Six distinct qualification outcomes:

Advanced, Intermediate and Foundation Baccalaureate and Technical Baccalaureate at Advanced, Intermediate and Foundation Levels.  These could be A-Bacc, I-Bacc, F-Bacc and T-Bacc A/I/F – for argument’s sake.  Crucially, whilst these elements are part of one system, there is no suggestion or any need to make spurious equivalences between A-Bacc and T-Bacc Advanced.  They are different, valued in their own terms. Similarly there are no GCSE to A level equivalences.  The scores only have meaning within the separate qualifications.

The assessment outcome of each unit is expressed as a score. As I have argued elsewhere, grading is massively flawed as it creates meaningless divisions in a continuum of achievement.  Scores are much more subtle and truthful about attainment. The task of the Exam Board (s) would be to generate assessments that could yield outcomes with this numerical scale.  The scale would be the basis of securing consistency in standards from year to year but would not become a ceiling on achievement; ie it is not norm-referenced;  all students could achieve about say 60/100 in theory.  However,  in practice we might expect a normal distribution of outcomes in general and the top 10% of marks should be very hard to achieve from the outset; this would require assessments to be designed with real rigour, beyond current A* at both GCSE and A level – the Intermediate and Advanced levels. Over time, we’d expect the average scores to increase as schools improve.

Crucially, there is scope for any student to study beyond the core of 8 intermediate units and three advanced units.  Students could add additional points to their total score by taking further courses.  However, all students – and all schools – would need to include their core scores as one of the key measured outcomes.   A student may gain a Standard I-Bacc score of 712/1000 but a total of 950 because they took additional courses.  All students would receive a standard EBacc Transcript detailing their performance in every element.  This would become a standardised document that all employers and universities would understand immediately.

There is some debate about whether an intermediate level is required – ie why not simply have one set of post-18 qualifications?  In my model, there is no limit to the age of students when the various units are studied.  However, my experience of a British International School was that iGCSEs were highly valued as preparation for the IB compared to the less rigorous Middle Years Programme at that time. However, only the core I-Bacc components are a strict requirement for the A-Bacc in my model.

I fully acknowledge that I do not currently have my finger on the pulse of every Technical/Vocational qualification on the market.  Work needs to be done to map existing courses across or design new ones that would be compatible with each other such that Tech Bacc standards were equivalent for different fields of study at the same level.  However, I feel that this model allows us to resolve the Academic-Vocation divide.   There are separate pathways but everyone is part of the system; everyone has a common core.  All pathways are equally valued – if not strictly equivalent.

There are lots more.  At this early stage of this model, I am open to suggestions on all fronts.  I hope the key concept comes across – I don’t want to write too much more because it could all change.  However, please do make suggestions or ask for clarifications if this diagram is not clear enough.  As I always say in these situations… you are not allowed to say you don’t like it unless you are prepared to make a specific suggestion that is better!  That is my challenge to any reader:  I know this isn’t perfect but can you suggest a model even better than this?  Let’s see….

I’m delighted by the response to these ideas.  I’ve been challenged on various fronts and have adjusted the framework slightly.  Here is an updated model, with some notes:

Further thinking: Apologies if it is repetitive:

The underlying principles of my model are as follows:

I think my model delivers these goals.  Depending on the level of ability of a student, there is a set of assessment units (broadly equivalent to GCSEs and A Levels) that would provide an appropriate level of challenge for all learners in the system, allowing a detailed, formally accredited transcript to be drawn up representing a full picture of every young person’s achievements.

In addition to the overarching structure, I am also proposing that the component units should be approached in a different way:

The Foundation, Intermediate, Technical and Advanced ‘Bacc’s provide four different general umbrellas that allow just enough variation to cater for all needs, within with appropriate, challenging assessment scales are used to give recognition the level of attainment. 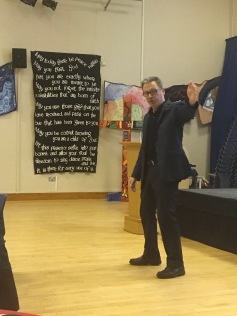