I wrote this for our student newspaper @KEGS_Ambassador: My journey into Twitter

Two years ago we started the @KEGS_Chelmsford Twitter feed as a way to get school news out to parents.  We now have over 550 followers.  However, beyond that I’d have said that Twitter was just a stream of txt-spk trivia and celebrity gossip. Lol.  Of course this is partly true but recently I discovered that it is actually something quite different.  In May 2012 I went to a conference for Essex Headteachers led by US guru Alan November (@globalearner) and now I’m a total convert. I realise that there is a quiet revolution going on that I hadn’t been fully aware of.  Things are changing very rapidly in the way we access and store information, how we create documents, how we share ideas and information globally and how lessons in schools can be built in a new ‘edtech’ world. 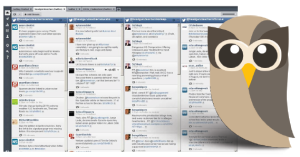 There are lots of new tools out there (diigo, evernote, dropbox, googledrive and so on) but the core discovery has been that Twitter is a tool for professional learning and dialogue.  In two months I have collected over 250 people that I follow.  With hundreds of tweets coming in every day, it can be overwhelming but using Hootsuite (a web-based version of Tweetdeck – and there are other similar twitter platforms) I organise the flow of tweets into categories.  With my lists set up, I have streams for science, education, government policy, innovation in learning, physics…and so on.   I follow some universities, UCAS, journalists, scientists and people that write interesting blogs.  The best tweets are those that contain a link to a website, a blog, a picture or a more detailed source of information.  It is not about the 140 character message.  Some of my favourite ‘follows’ are:

There are also hashtags that allow me to communicate with anyone with a particular interest. For teachers there are several: #ukedchat #pechat #gtvoice #edtech #mathchat #geogsolo #engchat #musiced  and so on… By following the hashtag on Hootsuite, it is possible to communicate with anyone who uses them.  I’ve had exchanges with MPs, a Headteacher in New Zealand; journalists from the Guardian and lots of teachers from all over the world.

Another discovery has been blogging; I have started a blog to record my thoughts under the name headguruteacher (one of those things that starts as joke but then gets stuck) and already, in two months I have had 5000 page views from 20 countries including the USA, Canada, Brazil, India, Jordan, Poland, the Philippines and Iceland.  By tweeting about my blog, to my astonishment, I now have nearly 300 people who follow me; mostly they are teachers, Headteachers and a few education commentators.  KEGS has a unique place in the school system and it appears that the things we do here interest people.  Blogging and tweeting go hand-in-hand; this is the future of publishing – anyone can write and reach an audience across the world.

As 21st Century learners, educational technology will influence how you will learn at university and how you are likely to earn a living in the future.  If you harness twitter – and all the other bits of technology – your approach to learning will change permanently.  You have to be responsible (twitter is very very public) but if you use it seriously, it opens so many doors.  Next term I will be asking for people to join a student ‘ICT Think Tank’ to complement the staff version. Let’s find out what all this is ‘edtech’ stuff is about and test it all out! If you are interested let me know.  We will also be launching the Global Reach Blog Challenge.  Who can combine the creativity to write a really good blog, along with the ingenuity to use social media effectively to reach the widest global audience?  Could it be you?  (There will be a prize!)  This is my kind of revolution; one you can get involved with sitting down!  But it really is a revolution…..

Since writing this, over the summer, the whole enterprise has grown.  With over 750 followers and close to 10, 000 blog hits from 60 countries, the power of the blog-twitter combination has been extraordinary.  A big boost came via @TeacherToolkit who gave my blog a big plug.  I’m about to launch the Global Reach Blog Challenge…. Anything is possible.

3 thoughts on “The quiet CPD Revolution… getting louder! Twitter”