“The Edutronic”: A great teacher flourishing 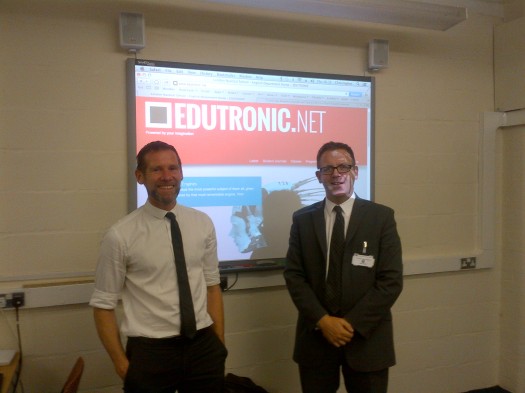 One of the great privileges of my job is having the opportunity to meet the people that I admire and that inspire me.  Earlier this week I paid a visit to The London Nautical School to meet Mr Edutronic, Christopher Waugh.  Chris contacted me after I wrote about ‘What makes a great teacher’ and I then took a look at what he has been doing at his school with the Edutronic_Net website.  Twitter brought us together – kindred spirits meeting in cyberspace, which is a great joy in itself – and we have been exchanging ideas since.

Chris is a pioneer, working with his colleagues and his students to develop a way of using technology to enhance and enrich students’ learning in English.  The whole-class blog and the students’ personal blogs allow Chris and his students to engage in a dialogue throughout the process of writing, far extending the exchange that is normally confined to lessons and book marking. He is with his students as they write, through a series of emails sent each time they update a blog-post; the material dealt with each lesson is all nicely set out in time-order for students to review at any time.  It really is quite inspiring and I recommend that you browse through the details of his blog and those of his colleagues.  The blog-site is now so key to the work of the department that it now part of the everyday teacher-student discourse.  “Where’s the homework Miss?” a student asked Ms Turner.  “It’s on the Edutronic” she replied.  ‘The Edutronic’ – I just love that! 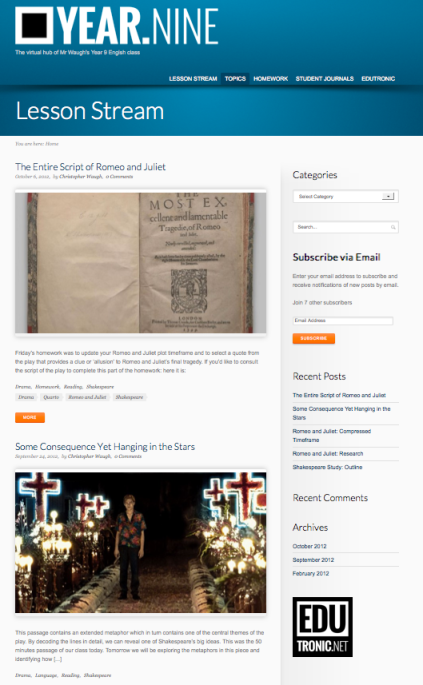 During my visit, I saw a lovely Year 9 lesson where students were reading through a couple of scenes of Romeo and Juliet.  This was a mixed ability class and Chris had devised a number of strategies for engaging them all.  Wesley was ‘teacher’, giving stage directions but also calling the class to order (we was also very keen to show me his personal blog after the lesson); Aaditya and Joe, two very perceptive students, were the guides, providing an overview of the plot, the timeframe and the characters’ motivations as others read out the lines. Aaditya was also on hand for historical context!  On the screen, the Edutronic website showed Leonardo di Caprio… the reading would be supported by scenes from the Baz Luhrmann film at a later time.   But, crucially, there was no softening; no simplification.  Chris felt strongly that reading Shakespeare can’t be made simple … the challenge, the struggle is part of the experience and his students were all embracing that struggle without protest.  They were with him, trying as hard as they could to keep up, to keep with it.

In the background to this traditional reading of a play, the Edutronic was ever-present. Students knew they could refer to it later; there would be guidance,  film links to play back, exemplar material and, crucially, Mr Waugh’s feedback on everything they wrote.  Lots of the boys were looking forward to getting onto their blogs to continue their writing and to contribute to the shared learning of the class as well as doing it for themselves.  The newly delivered ipads promise even greater access to the blogs. Up to now they have been used in between lessons, not during them.  But now, with ipads and internet access readily available, the blogging process will be integrated into lessons themselves.

Chris and I talked at length about the importance of pedagogy; the need for feedback to be as close to the act of learning as possible; the need to follow your teaching instincts in creating a learning environment that goes beyond mere hoop-jumping – and the importance of being highly self-critical and evaluative. It feels like a good idea but is it working?

So, although I went along to learn about blogging (and I now know more about Apple kit and WordPress functions than I know what to do with…) the Edutronic_net site, whilst fascinating, was not the main thing I learned from and is not the only purpose of this blog.

It struck me while talking to Chris that he and the environment he is in typify what I have described in other posts. Firstly, he is a classic example of  “what makes a great teacher” on all fronts: he is a driver, standards matter and he continually challenges his students to go deeper in their thinking;  he is committed to the relationships he has with his students – learning is personal and he knows his students so, so well.  I loved all the nuanced, individual prompts, challenges and words of encouragement that different students received.  It wasn’t always fluffy and warm – they were being pushed all the way. The whole programme is ‘off piste’ – Chris is taking his students way beyond the syllabus; Romeo and Juliet is more than a play- it is human and cultural exploration on a grand scale; he motivates through learning – his students are hungry for it, desperate to get the meaning, to understand it… to be equal to the challenge presented by reading Shakespeare. Finally, but crucially, he is deeply principled.  Learning matters to Chris, far far beyond the limited horizons of an Outstanding judgement or a few notches on the A*-C ladder.  It is rare to meet someone so deeply reflective about their practice.  Chris’ classroom is the home of integrity and passion…. And as a result, down in the basement of an inner London comprehensive school, magic is happening.

However, he is not a lone ranger fighting the regime.  Chris has found himself in a situation where the conditions allow him to be the great teacher that he is.  In the analogy of the rainforest, Chris is flourishing; he has found his niche; he can grow and explore the world of teaching and learning without being unduly shackled by the constraints of a limiting culture.  Chris and his colleagues (Laura Ovenden @OvendenLaura, Summer Turner @ragazza_inglese and Andrew Jones) are in a  department that has either created or has been given the space and freedom to truly explore the possibilities.  On my visit it was a joy to spend time with people so fired up by what they have achieved and by what the possibilities are as they look ahead.  They reported having overcome some challenges to have reached where they are, but I felt that all ‘the conditions needed for great teachers to thrive’, as stated in another of my earlier posts, were present.  In particular, they have been given the autonomy to develop the curriculum and pedagogy within the department; they have been given room  for growth – supported with resources such as the ipads – and, also, their work appears to be given the recognition it deserves. The feedback from students is certainly very positive and the teachers’ motivation derives from a sense that they are doing something special; they are making a difference – a big difference! 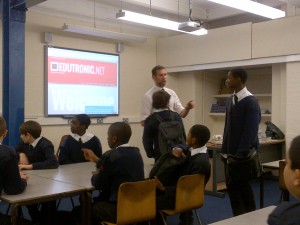 So, I would like to say an enormous thank you to Chris, (@Edutronic_net) and his colleagues, Laura, Summer, Andrew and the Headteacher, Mr Dastagir. I will be following developments with great interest.  And to Year 9s at London Nautical  – I hope you appreciate just how lucky you are to have your lessons down in that basement with Mr Waugh and The Edutronic!

See below the ‘Pingback’ to Chris’ own blog about this initiative: the pedagogical underpinning and the motivation.