Launching the College of Teaching: Vision vs Inertia

I’ve often argued that it is far, far easier to campaign against something that you don’t like compared to campaigning for something that you want to happen.  There are countless examples in education at school level and national policy level.   One of my leadership mantras is that in order to challenge an idea, you need to have a better one – or make a positive case for maintaining the status quo; it’s not enough simply to resist change or criticise a set of ideas without a clear alternative.  The scale of inertia in our system is huge: there are hundreds of thousands of teachers many of whom have battle-hardened, well-founded reasons to resist any new initiative.  As a result I’d suggest that most ideas are exterminated before they’ve had their first breath.   In many ways, that’s probably a good thing because it means that the ideas that survive have to be good enough to take root.  But it does mean that a massive effort is required to get things off the ground – even if they’re good ideas. The most likely outcome of any educational initiative is that it will fail due to inertial forces.  The next most likely outcome is that it will take years to have an impact.  Even if the status quo is terrible, people will defend it inadvertently by resisting change and preventing initial ideas from living a while before they’re fully developed.

As school leaders, we need to be aware of that in implementing institutional change.  This well-known grid devised by Tim Brighouse  is worth revisiting:

An incoherent vision leads to confusion; a lack of incentives leads to opposition. A poor action plan leads to a false start.

The College of Teaching

It seems to me that this is the territory we are in with the College of Teaching.   It’s a really good idea – at least, lots of very different people seem to think so;  very few people are actively out there defending the status quo and the resources seem to be on offer.  Still, the inertial resistance is formidable.  With reference to the Brighouse grid, it could be that the Vision could be stronger; that the Incentives could be more clearly stated and that the Action Plan could lead more directly to a fully teacher-led body. However, I’d say that the proposals do a pretty good job on all fronts.  The proposals published last week are contained in this document: 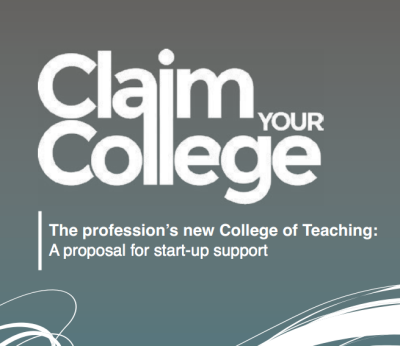 It sets out a process by which the College could come into being from the initial founder stage through to the mature membership stage.  If this road map is followed, it would be possible to have an influential College of Teaching fully run by teachers delivering on a number of areas relating to teachers’ professional lives – within five years.   I personally don’t have a better idea than this and I don’t know of one; I don’t like the status quo so I’m very happy to support his proposal.  In saying that, I make the following assumptions:

It is also my experience that it’s a mistake to try to seek total agreement or have rules that are too tight before you get started; the experience of running a new initiative in practice will always throw up new possibilities; if you get too bogged down at the start, you never get going.  It’s like kids arguing about the rules of a game for so long that they never actually play it.

A few key issues seem to have occupied people in the early responses to the proposals: membership, lack of awareness across the profession and doubt that it can deliver significant change.  All of these questions are legitimate and necessary debates to have.

As far as membership goes, I favour the broad church approach.  This is partly because of the definition issue but also because, even if lots of ex-teachers want to join, the membership would be overwhelmingly dominated by serving teachers, mainly in maintained schools; they would rightly hold the power and should have the confidence to keep the door open.  In practice, membership would be a matter for the members – letting in who they want to let in. (That might include an ex-teacher like David Weston himself who has probably done more than any other individual to further the cause of teacher CPD; I’d let him join if it was up to me -after all, he only left teaching in order to serve the profession as a whole and couldn’t have done it if he’d stayed in school.)

Thinking purely pragmatically, I’d argue that if teachers as a group had the time and the capacity to act collectively on a national level (given the scale of the system and the simple fact that they’re working full-time as teachers)  – the College would probably already exist.  The people who’ve got the CoT to the stage it is at now have done so because they can; I’m grateful and I’d like them to get on with it, tweaking and adjusting the process as the consensus builds.

In terms of awareness, I see the slow growth as inevitable.  Right now I’d expect awareness of the College of Teaching to be very very low; teachers are generally fairly isolated in their schools and are very often too busy doing their jobs and keeping up with subject-specific developments to get too involved in embryonic ideas that come and go; most teachers don’t use Twitter or read the TES.  It will take years for the CoT to penetrate across the country.  That doesn’t make it irrelevant; as the CoT grows in powers and influence, more teachers would be drawn to it.  It’s fine to begin small (with all the nay-sayers outside it, saying what they like) and then, gradually, if it does its job, the argument will be won and it will grow.

The question of whether we need a College at all is interesting.  Clearly we’ve got to where we are without one and we’re still alive.  The question is whether our system would be much better in the long run if teachers as professionals were represented by a national body, driving up standards of CPD and leading the national debate on effective teaching outside the political arena.  We’ll live without it – of course.  But if we’d be much much better off with a CoT then it’s worth fighting for. I don’t think that message comes through strongly enough – not yet.  At this stage, I’d say it’s more important to promote the Why of a College of Teaching, above the Who or the How.

The worst case scenario is that the movement divides into camps.  I find that people are often more comfortable uniting around an oppositionalist stand-point.  I remember an old joke about a man from South Wales who was found after many years living on a desert island; he’d built two churches.  When asked why he needed two he said: “This is the church I go to  – and this is the church I don’t go to”.  (In reference to the Methodist/Baptist division in his home town.)   And, of course, there is the Popular Front of Judea scenario:

If we want a College of Teaching to represent teachers, I’d suggest that it’s there for the taking.  Teachers need to step forward and seize the moment – we need some individual teachers willing to do this.  If the ongoing debate leads to a better process and a better outcome, that’s great.  Let’s have the discussion in that spirit.  But if the debate simply adds weight to the inertia; not offering any alternative except the status quo, then that’s what we’ll get.  That’s what we’ll deserve – and the chance will have gone.

7 thoughts on “Launching the College of Teaching: Vision vs Inertia”