600 years of history. Where to start? With the big picture perhaps.

Increasingly, I find myself drawn to the issue of chronology; the importance of understanding the scale and sequence of historical eras and the framework for locating every event and every historical figure relative to every other.  This is the big picture; the story of everything we’ve ever known and ever done.  This hyperhistory site is great place to start exploring chronology although the internet is awash of timelines of one kind or another.

As a science teacher, I find that a strong historical framework is essential in developing the concepts and making connections between them.  One of my all-time favourite books is Bill Bryson’s A Short
History of Nearly Everything: 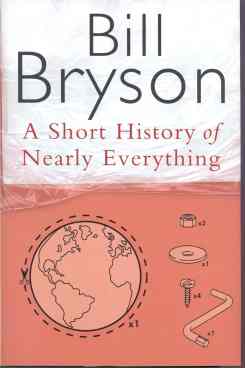 This book should be compulsory reading in schools. IMHO

The book pulls together various strands of science so that you get a sense of the significance of certain discoveries and theories.  For example, the audacious revelations of Darwin’s ‘Origins’ are all the more remarkable given that the prevailing wisdom regarding Earth’s age in the mid-19th C didn’t allow sufficient time for evolution to have progressed as far as it has.  Geological science later developed to yield an Earth-age entirely compatible with evolutionary time-scales; the discovery of plate tectonics provided further supporting proof and our current knowledge of genetics absolutely seals it.

There is a wonderful story to tell about human understanding of our existence on a planet orbiting a star within a spiral galaxy and our composition from elements – some of which formed during a supernova explosion. From Ptolemy to Copernicus, Galileo, Newton, Einstein and Hawking, the story of how ideas have changed can help us to understand the ideas themselves.

The interaction between the history of science and the history of human development is obvious enough. As we learn about social development, settlement and urbanisation, the technology of communication and transport; the development of medicine and healthcare and the quest for sources of energy that meet demand, we are gradually building up a complex multi-strand timeline of interacting themes. These themes sit alongside, and interact with the parallel timelines relating to politics, revolutions, monarchies, empires, wars and individual acts of courage or foolishness.  In turn, all of these themes interact with the development of culture – music, literature, language and philosophy.   In some ways, the whole of the curriculum is one giant timeline.

In English and Music, the historical reference frame is essential to understanding the development of the art form.  In literature, it’s vital to the understanding of a text to know about the time in which it was written.  Students should be able to place Beowulf, The Canterbury Tales, Twelfth Night, Frankenstein, Wuthering Heights, The Great Gatsby and Animal Farm in sequence, located in their place in social history, if they are to understand all the references and linguistic nuances. Similarly, in music, knowing  how the timeline links Bach to Mozart to Beethoven to Tchaikovsky to Stravinsky  helps to interpret the music and to understand the development of symphonic music.

I’m less clear how chronology influences mathematical thinking but it can certainly enrich the study of maths. I am currently reading Simon Singh’s The Simpsons and Their Mathematical Secrets. I learned here that the symbol π for the circumference-diameter ratio was only introduced and popularised in the 1820s. Previously I’d always imaged that π has some ancient significance as a symbol but that’s not the case. What this means, is that earlier mathematicians would have wrestled with the concept of π and its numerical value in a variety of ways without a shared symbolic language. Simon Singh has added a piece to the giant timeline of my understanding of the world.

So many people. But who chooses who we should study?

A key question for curriculum designers, not least those responsible for the history curriculum, is deciding what to include.  Where to start? A typical English student will encounter some standard topics: The Romans, Ancient Greece, 1066 and all that; The Middle Ages, The Tudors, The Stuarts,The Victorians and then WWI and/or WWII.  They may also explore some unifying themes: eg science and technology, church and state, monarchs and elected governments, revolutions and wars, food and clothing, women, children, poverty and so on.    The hope is that this matrix of themes and specific areas of study will lead to a rounded view of history in the end.  However, one of the difficulties is that these studies are spread over so many school years that it is difficult for students to knit them all together – especially if they only remember what an 8-year-old might remember about the Roman Empire.

The central dilemma for planning a history curriculum is to achieve the optimum balance of coverage and depth.  20 years ago I completed a Masters in Development Studies. My final dissertation focused on UN Intervention in Somalia from 1991 to 1993.  It was a very focused study of one particular conflict but it required knowledge and understanding of a wide range of other aspects of history.  A key resource was the fabulous World Politics since 1945 by Peter Calvocoressi.  Understanding Somalia and the UN in 1991 required an understanding of African history, colonialism, post-war American hegemony and the development of the notion of humanitarian intervention. It also required some understanding of neo-Marxist and neo-liberal theories of economic development and their origins.  Gunmen hijacking food convoys or shooting down US attack helicopters in Mogadishu were the details in a much bigger picture.

So, how do we build this balance into the curriculum? There is only so much we can teach in the time we’ve got.  One approach is to focus on a selection of key reference points; the key events.  As I describe in my Raising the Bar post, one such list has been proposed by Professor Robert Tombs: 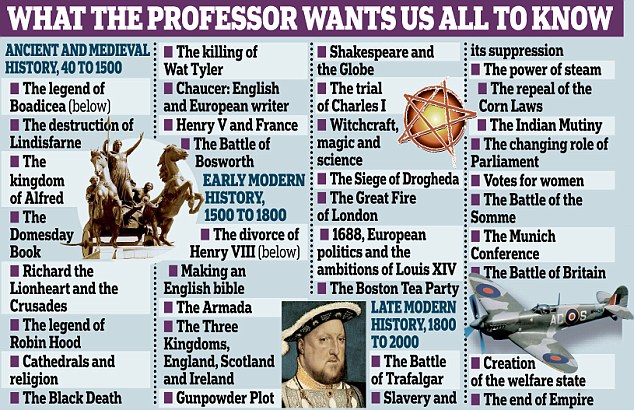 I know that in the course of the debate around the History National Curriculum, various people have reacted against these prescriptive lists on the basis that they are too narrowly focused on specific cultural perspectives.  However, it’s hard to argue with the idea that if most children ended school knowing about most of these events, perhaps amongst many many more, could place them in the right place relative to each other on a timeline and explain their significance then they’d have had a pretty good historical education relevant to someone living in England. Of course, there could be a totally different set of events; it could be more global; more multi-cultural – but any list will reflect the biases of its author.

Even here, as presented in the graphic, the list is inherently partial and disjointed. It’s not clear how all the bits fit together.  History is so much more than a sequence of isolated people and events.  I’d suggest that a macro timeline is the place to start.  Even a very detailed study of The Gunpowder Plot isn’t much use if it doesn’t ft into a much wider view of the 1500-1800 era.  If chronology was given firm core status in the curriculum, across every relevant subject, and every school child carried around their timeline (a mental model of time supported perhaps by a physical record?!) then in every subject they could explicitly refer to their chronology framework and update it continually.

For example, if you were looking at something that happened between 500-1000AD (that very obscure era in our history) a big picture would be a great place to begin: 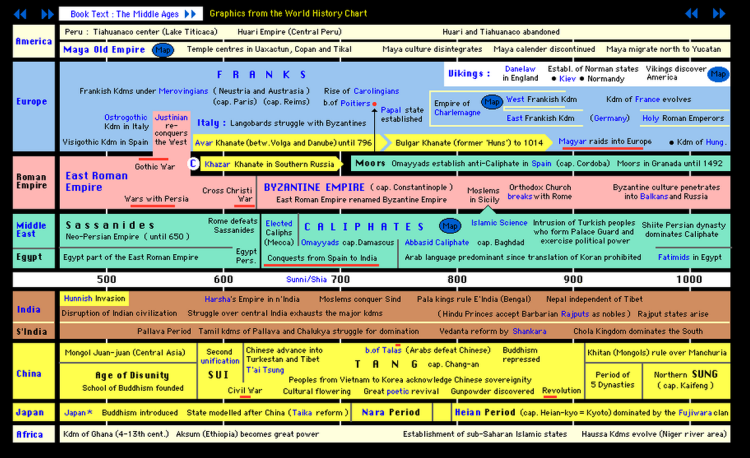 So much happened -but it’s still a relatively obscure historical period.

Before diving into any individual events or stories of individuals, it is instructive to get a sense of what else was going on.  To help recall and retain some of this, perhaps it would be worth learning some key dates; not because knowing dates matters for the sake of knowing; but because knowing the dates helps to structure the framework as a whole.

It struck me when reading Martin Robinson’s superb Trivium 21st C, that if we’re going to plan a grammar on which our curriculum is based – the core knowledge that informs our dialectic explorations and rhetorical communication – chronology would be right at the heart of it.   I am now discussing this with the Head of History at my school.  Do we simply allow the chronology to develop organically over the course of students’ history education or should we make it much more explicit as an over-arching or underpinning aspect of the course? Should we be asking colleagues in science, English, music and elsewhere to be contributing to timeline education in a more concrete, explicit manner?

It’s an ongoing discussion.  We’re not asking students to prepare for a pub quiz, swotting up some dates to impress their mates.  We’re preparing them to create a much more ambitious and complete historical model of everything that could ever fit on a timeline.  The idea is that every time a student meets a new book or poem, new scientific theory, a new composer or a new historical figure or event, they are encouraged to open up their (metaphorical or physical) master timeline to link it to what they know already,looking at the picture first, then drilling down to the specifics.

31 thoughts on “Teaching the Timeline: Chronology as Core Curriculum”